Loading cycle of a boiler with time-out and double level probe (minimum/maximum):

The loading function remains activated for a maximum of 150 seconds (so called time-out). After this period of time the pump and solenoid valve outputs are deactivated in order to protect the machine from eventual breaks or malfunctioning. 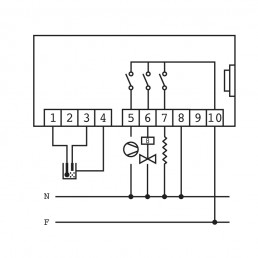